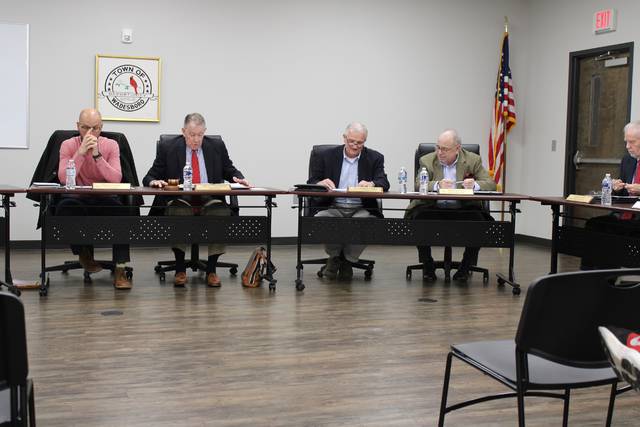 Wadesboro’s Town Council held their first meeting of the year on Monday, Jan. 6. -

WADESBORO- The monthly Town Council meeting was held at Wadesboro Fire Department on Monday, Jan. 6. The main topics discussed at the meeting included the purchase of a ladder truck for Wadesboro Fire Department, repairs to a sewer line on East HWY 74, and a zoning ordinance change. However, it was during a proposal to lock the gate at Wadesboro City Park after hours that the proceedings became mildly heated.

It was proposed that the Wadesboro City Park lock its gate from the hours of 9 p.m. to 7 a.m due to damage of property at the park and trash left on the grounds. In addition to locking the gate, Councilman John Ballard also suggested installing more cameras to watch over the park and possibly prosecuting offenders.

Mayor Pro Tem Fred Davis disagreed with the hours proposed, claiming that the park gives, “citizens something to do,” and that a locked gate would have a detrimental effect on the youth in the area.

Public Service Director Hugh James argued that the park needed to open earlier than 7 a.m. because many of Wadesboro’s citizens jog and walk around the park as early as 5 or 6 a.m. James also mentioned that, in the past, locking the gate did little to nothing to deter people from entering the park after hours.

Councilman James David Lee motioned to leave the decision concerning what hours to lock the gate to the park up to Town Manager David Edwards and his Department heads. This motioned was seconded and passed by everyone except Mayor Pro Tem Fred Davis, who opposed the motion.

The meeting went off without a hitch for everything else on the agenda. The council approved a street closure resolution for Martin Luther King, Jr. on Jan. 18, 2019. A zoning ordinance change was passed for B & B Pest Control Office. It was changed from R-20 to and R-0 in order to allow them to relocate their offices from 204 S Rutherford St. to 1119 Morven Rd.

Town Manager Edwards and Fire Chief Scott Martin discussed the $750,000 FEMA Assistance to Firefighters grant given to the city in order to purchase a new ladder truck for the Wadesboro Fire Department.

Edwards and Martin have found a low bidder for a truck at $911,000. The budget has set aside $100,000 leaving a small shortfall that can be fit into the budget in the upcoming fiscal year. They are hoping they can negotiate with the fender to get the truck delivered by April and make the final payment in July. The deadline to use the FEMA grant funds is in September.

The Town Council also passed a motion to send a letter written by Mayor Bill Thacker to Duke Energy’s District manager, David McNeil, concerning a number of inoperable street lights along major travel corridors in Wadesboro. These lights have been reported and tagged for repair and Wadesboro is looking for a prompt resolution from Duke Energy in this matter.

Public Services Director James announced to the council that a sewer line broke on E HWY 74. The line needs to be replaced immediately and will cost the city around $83,000. The money for will be taken out of the contractor budget for Public Services. It’s estimation completion time will be two to three weeks. James said, “we will not bother traffic.” Edwards claimed, “it is feasible we can absorb the cost without budget amendments,” due to the town being ahead in sewer services expenditures in the current fiscal budget.

Town Manager Edwards ended the meeting with a financial report. He expecting a tax check at the end of the week and said that revenues for the the Town of Wadesboro are now exceeding expenditures.