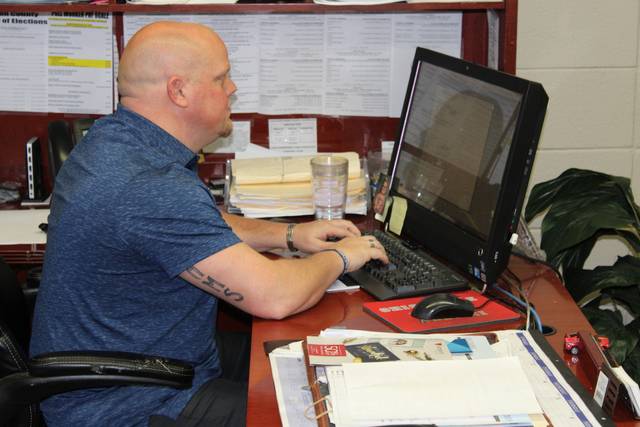 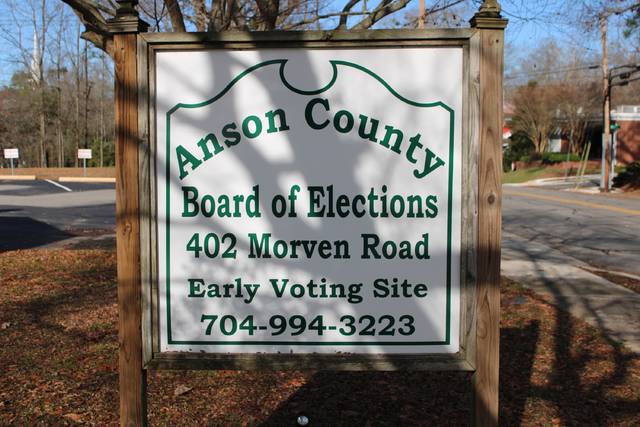 The Anson County Board of Elections is located at 402 Morven Road, Wadesboro, NC. -

WADESBORO- The upcoming elections in 2020 are sure to be a massive undertaking. One of the core people working behind the scenes in Wadesboro to make sure everything goes smoothly is Steve Adams, Director of the Anson County Board of Elections.

Adams has been employed with the Board of Elections since 2008 and became their Director in 2012. He also became a Certified Elections/Registration Administrator, which is the highest designation available to elections and voter registration officials, earlier this year.

These day-to-day duties include preparing for elections, updating voter records and making sure they’re accurate, adding any new voters that come into the county, making sure any sure any changes to voting law and procedures are disseminated to the public, and following up with the State Board of Elections.

There have been a few changes to voter law and procedures that affect Anson County residents. The first concerns the Voter ID Law. “Just last week there was an injunction that was placed saying that photo ID, pending an appeal, will not be required in the March election,” said Adams.

A federal court announced on Thursday, Dec. 26 that it plans to temporarily block North Carolina’s voter ID requirements that were set to go into effect in 2020. The announcement came as a short note and indicated that the order explaining the decision would come down in the near future. The preliminary injunction means that a photo ID requirement will not be in effect for the state’s primary in March, absent a successful appeal.

Changes in the Photo ID law also affect Absentee by Mail voting. Unless it changes, photo ID will not be required in absentee voting in the upcoming elections. However, other changes to absentee voting has happened. “A person who requests an Absentee by Mail ballot, they must turn in the state request themselves or by an immediate family member. It used to be that anybody could turn in an request form, but that’s changed,” said Adams. Examples of immediate family are spouses, children, parents, and siblings.

Adams added, “If and when the photo ID does come into effect again, it is not necessary to have a Board of Elections issued photo ID. If you have a driver’s license, state ID, that is allowable. Some voters thought they had to have one that we issue, that is not the case. We can issue you one, but it doesn’t have to be from the Board of Elections.”

Another change is that the Anson County Board of Elections approved the merging of the three voting precincts in Wadesboro into one voting site. The board then petitioned the NC State Board of Elections Director Karen Bell to make this change official and permanent. The merger was approved on Dec. 18, 2019.

As a result of the merger, Wadesboro voters that reside in Districts 5, 6, and 7 will now vote on Election Day at the Lockhart Taylor – Ingram Room located at 514 N. Washing Street in Wadesboro, NC. Adams believes, “This merging of the precincts give voters in the Wadesboro Districts a centralized voting area. In addition it makes parking easier, curbside voting easier, and limits confusion for voters”

You can register to vote online. If you visit the Anson County Board of Elections website, there’s a link you can click on that takes you to the form you’ll need.

“Download it, print the form, and get it back to us. You can mail it in or come to our office from 8:30 a.m. until 5 Monday through Friday. The form must be signed and sent in here to our office 25 days before the election, that is our deadline,” said Adams. You can also pick up and fill out the form in person at the Board of Elections.

If you are not registered to vote and you want to participate in the primary election, that voter registration deadline is Feb. 7 by 5 p.m. unless they come to early voting. North Carolina law allows you to register and vote the same day during early voting. “We only have one early voting location and it’s here, in our office,” said Adams. Early voting will take place from Thursday, Feb. 13 until Sat. Feb. 29

The voter turnout for the country in 2018 was the highest for indiviuals 65 and older, with 65 percent for women and 68 percent for men in that group voting. Only 38 percent of women between the ages of 18 and 29 voted while 33 percent of men in the same age group voted in 2018. Over 52 percent of registered voters in North Carolina voted in 2018. The national average is 47 percent.

There are a number of ways you can help out during the election if you so choose. “We are always actively recruiting poll workers and precinct officials,” said Adams. Applications for these positions are available at the Board of Elections office. You have to be a registered voter in the county to be a precinct official.

The names of those wishing to be chief judges or judges are submitted to the Democratic or Republican party chair for review. Applications for assistants precinct officials are reviewed by the Board of Elections and Steve Adams who would then position people in precinct positions as needed. These are paid positions and also an excused absence from work for anyone who’s interested.

“I encourage voters if they have any questions about anything to contact us, to let us know how we can help,” said Adams. You can reach the Board of Elections at 704-994-3223.