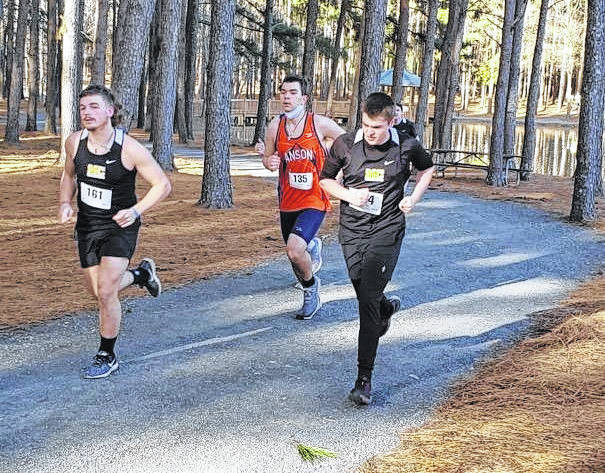 WADESBORO — Since elementary school, Caleb Laney found himself running and busy entertaining his many interests.

The sophomore cross country athlete first was introduced to running in third or fourth grade at Peachland-Polkton Elementary School. The school offered a “Mighty Milers” club.

Since then, Laney said he has “tip toed” around the idea of running until now. His interests brought him to play football in seventh grade, then to cross country and then to marching band before ultimately coming back to cross country.

Laney, who started playing the saxophone in sixth grade, said his year-long stint with the marching band came about because he was unsure if doing both would spread himself too thin. But this school year, shaken up because of the pandemic, Laney can run cross country in this winter season and then join marching band again in the spring, if all continues as planned.

“I’ve been improving since I haven’t been the most active,” Laney said. “I plan on doing it or to keep on practicing even after the season is over. I’m trying to improve my time and even next year.”

Laney has noticed his time improving throughout the condensed season. He plans to keep pushing hard to bring his time down more throughout then next couple seasons.

He wants to focus on making his running strides long, which will hopefully improve his endurance even more.

“Longer strides can mean more distance covered for less energy used,” Laney said. “I’m getting there but I’m not fully there yet.”

Laney said he keeps reminding himself while on a run to ensure he is taking longer strides. He mainly focuses on making sure he can conserve enough energy to make it through the 3.1 mile course. The motivation of improving each race keeps him going.

Another important factor Laney takes into consideration before races is his diet. There is a fine line between eating before the race but not too early that you could potentially get stomach cramps.

Now that Laney knows the commitment of both cross country and marching band, Laney is set on participating in both next school year and he plans on running during his last couple years at Anson High School.

“Seeing how laid back marching band is and seeing how I can practice on my own if I need to with cross country, I believe I can work both in with still having time to do school work and relax,” Laney said.

Outside of school, Laney is a Boy Scout in the Pee Dee District. He is working on his Eagle project where he is planning on renovating Peachland Park and turning it into a wildlife habitat.

Fundraising will continue into January, so Laney is confident in reaching his goal.

While working on his project, Laney is getting ready for the marching band season and will continue focusing on improving his cross country time.

WADESBORO — A sunny Saturday brought together golfers and volunteers to the second annual Sheriff’s Golf Tournament on Oct. 24.

POLKTON — The Anson County Animal Shelter turned around for the better since the new director started four years ago.

WADESBORO — The Anson County Chamber of Commerce welcomed another business to the area as the Arts Council opened the “new” Drake Gallery and Studio.