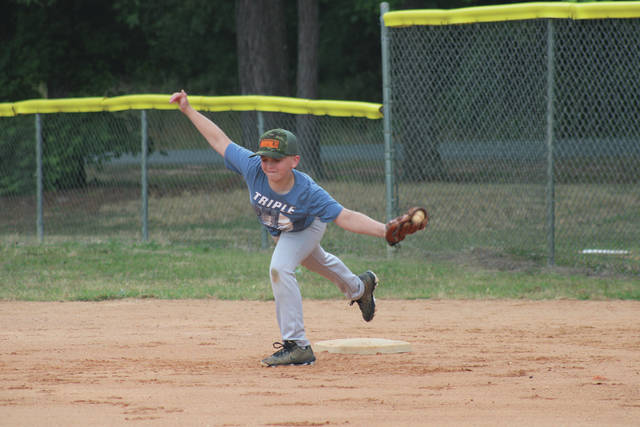 The Anson Ozone All-Star team perfects their catching during the first practice of the season on June 1. 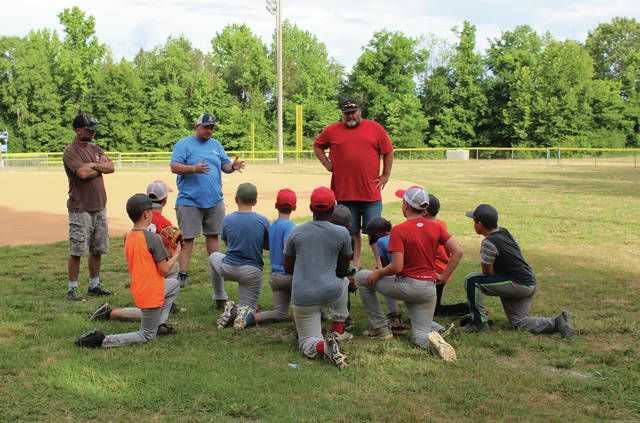 Ozone All-Star coaches speak with the team before starting practice on June 1 at the Field of Dreams. 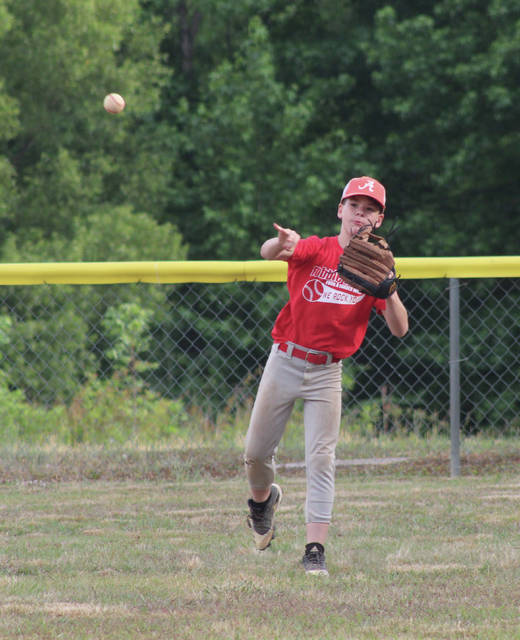 Ozone outfielders use their force to bring the ball back to the dirt during practice on June 1. 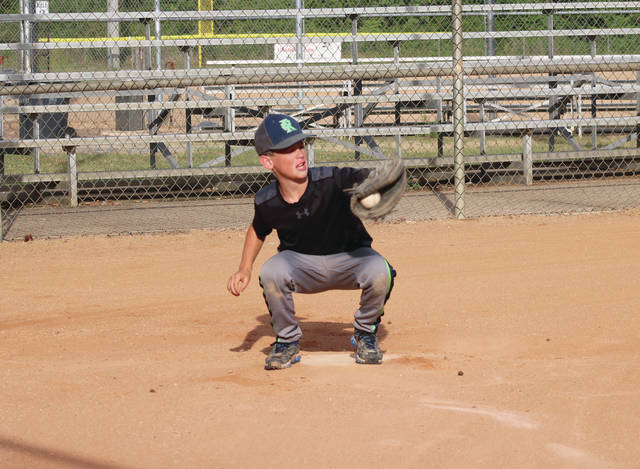 Ozone players return the ball to the catcher as they practice throwing drills.

WADESBORO — Cars pulled up to the Field of Dreams as eager all-stars grabbed their gloves and immediately headed out to the field.

Wednesday, June 2 was the first Ozone All-Star baseball team practice for the 11 and 12-year-olds.

Ozone started a few years ago, according to Assistant Coach Josh Chaney. The team was first affiliated with Babe Ruth but now is part of the Dixie Youth. Players are 11 and 12-years-old, but of course, younger players can decide to join, they just cannot be over 12.

Head Coach Mike Jones explained that by the time the all-star season rolls around, the regular Ozone season is just ending so there is no time for the players to try-out. Instead the coaches look throughout the season to see who would work best together on the all-star team.

The regular season usually starts around the middle of April and runs through the end of May. Jones and Chaney joke that even though they coach the all-stars together, during the regular season they are friendly rivals, each with their own team.

Following the regular season, all-stars pick up with district competition in the middle of June and states in July.

“If you win district championships, you do get to go to states,” Jones said. “We have such few teams in our league that we do automatically get a bid to the state championship.”

Ozone All-Stars went to states two years ago. The team played two games, lost two games and quickly returned home. And after a year off from COVID-19 cancellations, the all-stars are looking for a strong return.

“The state is really, you’re getting up there in competitiveness when you do that,” Jones said. “We’re hoping to do a whole lot better than that this year.”

Now the 12 young players are perfecting their game to make a run in the state tournament.

The players immediately started throwing and catching the ball with each other, warming up for the first all-star practice. After a huddle session with the coaches, they ran out to their field positions.

For only being 11 and 12-years-old, the players knew immediately the drills. One player led the drill by starting at home plate. He would throw the ball as a grounder to the different base players. Those players would run up and catch it, throw it around to another teammate, then back to home plate.

Their attentiveness stuck throughout practice with respectful “Yes, Coach” responses and listening to feedback with immediate corrections on their mistakes.

Jones said on the defensive side, the team is very strong.

“We have more talent this year than we ever have out here…It is very seldom that you see young guys as skilled as what they are,” Jones said. “But we need to work on our hitting some. That is pretty much our biggest thing we are going to try and work on the next couple of weeks.”

Practices are held on Monday, Wednesday and Fridays with an occasional Saturday. The issue now is molding all these star players from the three different teams into one cohesive unit. Throughout practices they will learn how each other play and hopefully they can gel together.

Jones and Chaney can rely on a few of the players as leaders, despite being so young. Together they are not just teaching about baseball, they are teaching all the players how to be great individuals.

The coaches are helping mold the players into young men through emphasizing hustle, respect and responsibility.

The district championship starts on June 19 and includes teams from Stanly and Montgomery counties. Anson will only have one all-star team while other counties may have two all-star teams.

Even with only one all-star team coming from Anson County, Jones and Chaney believe the league in the county is quickly growing. This was the first year there were three Ozone teams for the regular season. Eventually there could be a second Anson all-star team competing at the district level.

“Without our parents and grandparents, no way this could be possible,” Jones said. “I tell my parents all the time ‘it definitely takes a village to do this.’”

The Ozone parents are organizing fundraisers to help get their children to the state tournament. There is a GoFundMe website with a goal to raise $10,000 to help pay for transportation, lodging, uniforms and food during the tournament.

The team is also selling Krispy Kreme glazed donuts $9 for a dozen. Orders are being accepted until June 15 with a delivery state of June 18. If you are interested in purchasing Krispy Kreme, message the Anson Ozone All Stars 2021 Facebook page.

There will also be raffles and sponsorship opportunities to help support the team.

“(States) is really a special time,” Holly Williams, parent of an Ozone player said. “Once in a lifetime thing for a lot of them and something they will look back on for the rest of their lives with fond memories.”

If you would like to donate, go to www.gofundme.com/f/support-anson-ozone-all-star-kids-go-to-state?utm_campaign=p_cf+share-flow-1&utm_medium=copy_link&utm_source=customer.

“I’ll give that credit to the Field of Dreams right here, the Anson Athletic Youth Association,” Jones said. “We’ve really built our program up in the last, I’d say 4 or 5 years. That’s credit to all the volunteers, people that work here and it is an all volunteer system…”

Jones and Chaney are just as excited for the season as the players are. Even though they are the coaches, they are learning and growing more from the players than they could possibly teach.

“I just think I’m blessed by the good Lord to be out here and to have chance to do this with the boys,” Jones said. “I feel like it is a blessing, not from me to them, but I feel like it’s more them to me.”

Letter to the Editor | Real estate business shouldn’t use trickery

BURNSVILLE — The Burnsville Recreation and Learning Center is inviting individuals who have family members buried at the historic Poplar Springs Baptist Church to share their family’s stories to honor the local African American history.

Tell Patricia Frost “no” and she will only keep going.