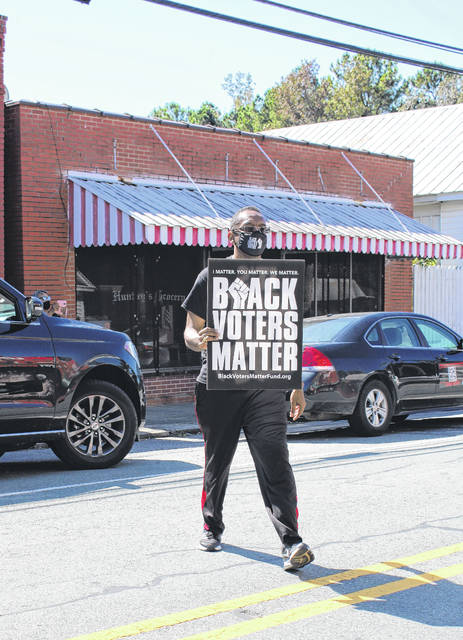 HOLLA! Director Leon Gatewood participates in the Black Voters Matter tour through Anson County on Oct. 1 as a way to help inform citizens to get out and vote. 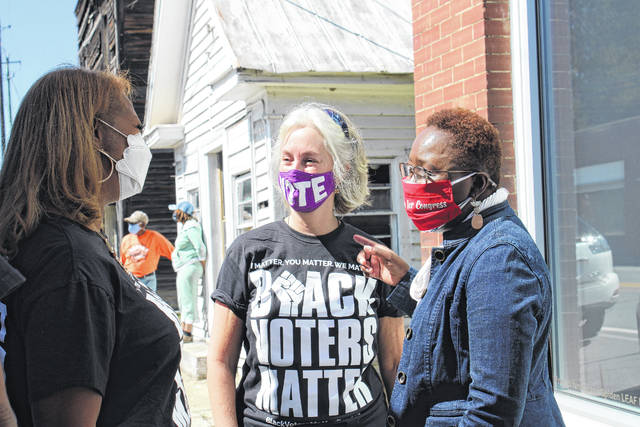 Democratic Congressional nominee Cynthia Wallace joins and talks with citizens about current issues and the importance of voting during the Black Voters Matter tour in Morven on Oct. 1.

The stop in Anson County is just one stop of 12 states on the group’s national tour. Each destination focuses on areas that may not get attention, with the hopes educating and promoting the right to vote.

“We are founded on two pieces, which is love and power,” said Danielle Brown, North Carolina Senior State Coordinator for Black Voters Matter. “We’re out here to get people to the polls and understand what it truly means.”

As the election sneaks up, Brown explained how you may exercise your power through voting, but it is not “the end all, be all.” The Black Voters Matter organization focuses on bringing power all 365 days of the year to marginalized communities.

This year in particular Brown has seen more engagement, stemming from the recent protests following the deaths of George Floyd and Breonna Taylor, among others which have sparked a change within some citizens. The chaotic Presidential debate between President Donald Trump and Democratic Presidential Nominee Joe Biden, she said, may have been concerned to many voters, but Brown and the Black Voters Matter are pressing on talking about why it is critical to vote, the positions you can vote for — not just at the top, but down to the local level.

“We are still seeing a lot of people fighting to figure out what they want do, how they want to move,” Brown said. “The debacle of the debate the other night had opened up even more questions for some people.”

Wallace, running as Democratic nominee for North Carolina’s District 9, traveled in the caravan through Anson County, supporting the organization and reaching out to the “fired-up” voters.

The HOLLA! Center partnered with Black Voters Matter to bring the bus through the county. Citizens could check their voter registration status through provided QR codes and they could even register, if not already registered. Often times Brown has seen people double checking their registration status, even though they believed to be registered, only to find out their status is not to be found.

Brown claimed that 171,000 individual registrations had been purged in North Carolina.

“People are finding that out right now,” Brown said. “We’ve had people who have been voting for 20 or 30 years, never missed an election on anything, and they are finding out they are not on these rolls.”

The purge, or cleaning of voter rolls, is a normal activity by election boards, mandated by the 2002 passing of the Help America Vote Act (HAVA). According to the Civitas Institute, 576,534 voter registrations were purged from North Carolina voter rolls in 2019.

“Our biggest fear is people getting to the polls thinking they have a ballot and they don’t,” Brown said.

Voter suppression is a common concern each election, and can come in the form of long wait times, attempts to complicate the process or others. Brown also considers COVID-19 a form of voter suppression because it has forced people to consider whether they should risk exposure by going out to vote — though voting by mail is an alternative.

“Some people don’t even know they have been exposed to voter suppression,” Brown said. “We’re able to get people to understand that and what it looks like a little more.”

As Election Day nears, Wallace said she’s not worrying about voter suppression, but rather focused on making sure the issue does not continue in the future. She hopes those who are elected will enact policies that will not contribute to voter suppression.

Wallace said the presidential debates have to potential to discourage voting, steering citizens away from polls after seeing pandemonium on the debate stage.

“(Voting) does matter at the top, Wallace said. “It creates a climate that escalates to these small towns.”

Black Voters Matter works beyond getting marginalized communities to vote. The organization wants to educate citizens on whether or not you have been a victim of voter suppression, and if so, how to respond. Both Brown and Wallace believe there needs to be a change going forward with elections.

MORVEN — If you have noticed a brighter Morven in the past week, you can thank Morven Councilwoman Corinthia Lewis-Lemon.

WADESBORO — The Wadesboro Police Department is investigating a shooting which took place the morning of Sunday, Sept. 20 about a shooting on Gills Circle.

WADESBORO — The Union and Anson County Habitat for Humanity started accepting applications for their Urgent Home Repair program and will be taking submissions until Sept. 30.