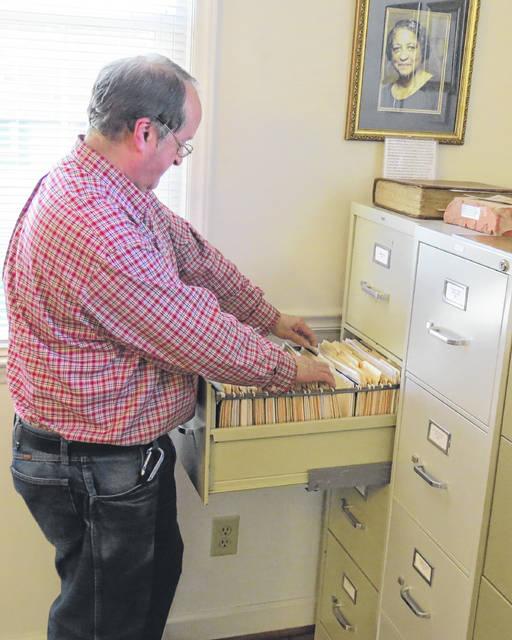 Steve Bailey looks through his files on the Black History Project. - 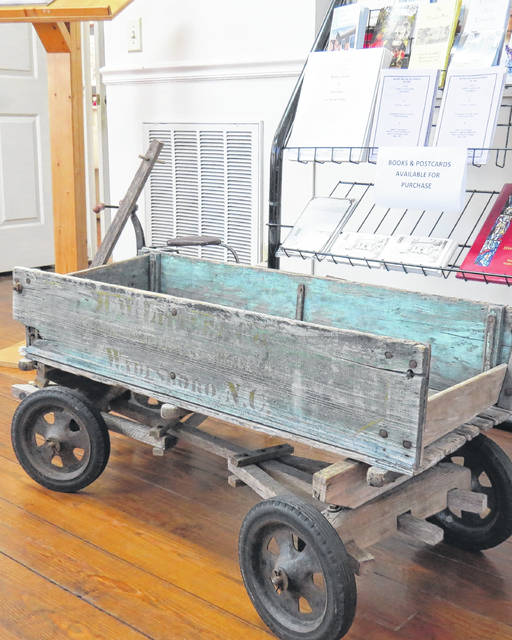 An over 100 year-old wagon donated to the museum. - 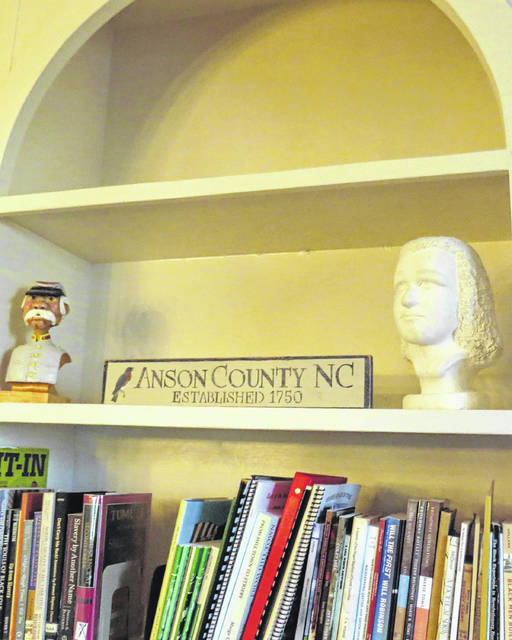 Bookshelves line the walls of the Anson County Historical Society and are filled to the brim. -

WADESBORO- Steve Bailey got his start as a genealogist and historian by listening to the stories his grandmother, Nezzie Bailey, and her siblings would tell at home.

“At first I was not interested. I wanted to watch TV and for her to be quiet. But she talked anyway,” Bailey said. “In the summer of 1976 when I was 16 years-old, I suddenly realized that I needed to start taking notes on everything she was talking about.”

Nezzie Bailey was born in 1895 and could remember all the way back to 1899 when she was just 4 years-old. One of his favorite stories she told was, “Grandma talked about when Great Grandpa Bailey took his second wife to go eat ice cream in uptown Wadesboro. This was about 1930 something and ice cream was the new rage. So he took her up there and the man behind the counter asked her, ‘What flavor do you want?’ and her response was ‘not too cold.’”

The Anson County Historica Society is a nonprofit organization. As stated on their website, they are, “Devoted to providing educational, cultural, and recreational benefits for the citizens of Anson County. It is dedicated to preserving the artifacts and structures of our past so we can present them in an educational environment for everyone to enjoy.”

Bailey began volunteering at the Anson County Historical Society in 1997 to help then secretary Glenda Livingston with the Cemetery Book Project. Bailey would move on once she retired. However, Bailey would return in 2015 to begin work on the Black History Project. That project now contains 1100 files and visitors come from all over the US and Canada to examine the data.

Bailey’s official title at the Anson County Historical Society is Outreach Coordinator. His duties include inviting people to become members and requesting people to donate books and historical items relating to Anson and neighboring counties. Membership dues and donations goes to maintaining the museums, namely the Ashe-Covington Medical Museum and Leavitt House Museum.

In addition to receiving quarterly newsletters, members can enjoy three annual special events: The Garden Club in May, the Membership Banquet in November, and Open House in December. These are meant to be more of a “get-together” than a fundraiser, but guests can leave donations if they so desire.

Through countless hours of research, Bailey has discovered that numerous celebrities have ancestral roots in the Anson County region. Basketball legend Kareem Abdul Jabbar can trace his maternal lineage to the Morvin and Ansonville township area.

Gospel singer Lynda Tate Randle can trace some of her ancestors to the Poplar Springs Missionary Baptist Church community of Burnsville Township. Blues singer and guitarist Blind Boy Fuller can also trace his heritage to the Ansonville/Burnsville area. Patty Jones Daly Caruso, the mother of Carson Daly, former MTV personality and current host of The Voice, was born in Lilesville.

The cast and crew of The Color Purple hung out in the backyard of Anson County resident Mary Neal Hill to shoot the rail road scene. Hill, who is now in her 90s donated several photographs of the event to the Anson County Historical Society and remembers fondly a lunch she had with Whoppie Goldberg, Oprah Winfrey, Amy Irving, Richard Pyror Jr., Danny Glover, and Steven Spielberg. Those photos can be viewed at the Historical Society.

Will Robinson, who became the first African American coach in NCAA history when he accepted the position at Illinois State University in 1970, was born in Wadesboro in 1911. His family moved to Pennsylvania when he was 9.

One of the many victims of the vicious 9/11 terrorist attacks are from Anson County. Angelina Cash Carter was a staff accountant at The Pentagon and died when the planes struck.

One of the latest acquisitions of the Anson County Historical Society is a little wooden wagon. “About one month ago a Facebook friend of mine, Laurie Pope King, contacted me about donating it. It’s a little novelty wagon from the H.W. Little Hardware & Co store here in town from over a 100 years ago,” said Bailey.

Those interested in learning more about the history of Anson or neighboring counties can visit the Anson County Historical Museum at 206 E. Wade Street on Tuesday thru Saturday from 9 a.m. until 1 p.m. You can also call them at 704-694-6694 or contact them via their Facebook page.